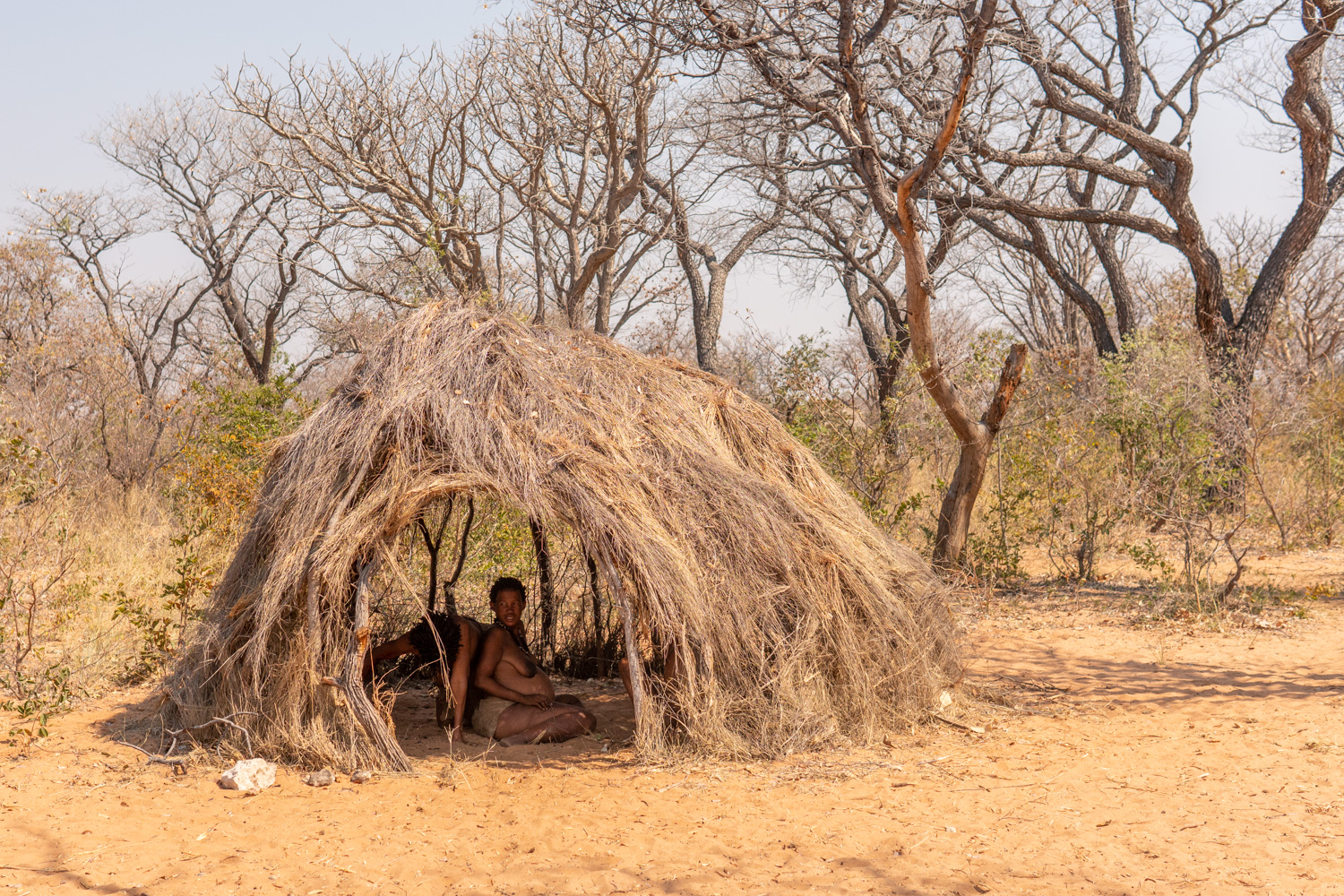 The night under the baobab

We left Botswana through the small border of Dobe. A few kilometers further on, we fork in the direction of a village. Valentin cuts the engine in the shade of a gigantic baobab. It’s a good time for lunch! We are so well protected that we decide to stay for the night.

We soon meet some villagers, including Barnet, who comes to greet us. We discover the clicky language of the bushmen also called San. A single word can include multiple clicks of the tongue. Despite our efforts, we are not very good at speaking Khoisan. Clicking the tongue while pronouncing a vowel simultaneously is impossible for us, but it’s not for lack of trying.

A few hours later, Barnet returns accompanied by an old man. He is the chief of the village, he wanted to meet us. To sleep here, as it is a protected area, it is necessary to register. Tourists are not common in this region. The proof is, the last visitors registered came in 2019.

At nightfall, Barnet is back. He wants to make sure that we are doing well and that we have enough wood. To protect ourselves from the elephants, we have to maintain our fire. Every night, these big pachyderms cross near the village. In the dark they are more dangerous, they can crush us without realizing it. Another way to keep them away is to make noise. In the distance, we hear the villagers singing. It is their ceremony before dinner. The San, a difficult sedentarization Our meal is ready, we invite Barnet to join us. This evening, it is pasta with broccoli. Between two mouthfuls, he tells us about the difficulties of his people to integrate in the Namibian society.
The elementary school is free but the family has to buy notebooks and pens. The child must also have a clean outfit, a soap and a bag; otherwise he is often humiliated by his friends and ends up dropping out of school. This was the case with Barnet. His family could not support him financially and under pressure and lack of materials, he was forced to leave school.

The Bushmen, now settled, raise cows which they also sell to the nearest town. A cow brings them about 8000N$. Today, they let the cows graze wherever they want, only some of them do not always come back. They can’t keep them in a pen because the area is very dry and grass is scarce. They currently have a project to create a field. Despite the arid climate, they want to try to grow corn. At the time of our visit, they were in the middle of building the fences of the field to protect the future crops from wild animals: elephants, kudu, elks,…

To learn more about the San culture and the changes that have taken place in this tribe over the years, we went to a Living Museum. Men and women in traditional dress (which they no longer wear today), show us their old way of life and explain their history. To know more about it, we made a video about it.

After 4 days of tracks, we have only 60 kilometers to join the tarred road. We finish this portion with a small family that we took in hitchhiking. The father holds in his arms a little girl of less than 5 years and the mother a newborn. Our paths separate at the intersection for Grootfontein, their destination of the day. For us, the one of tomorrow, when we will go to refuel. In the meantime, tonight we sleep at the campsite, for a little comfort, but mostly to have an adequate environment for our growing list of tasks. In addition to the laundry and the water refill, it’s time to dust off our engine air filter and to change the one in the passenger compartment. We’ve been putting in a lot of miles on the trails lately. It’s important to make sure the engine doesn’t get too dirty. Reinvigorated, including Uyo, we leave for the famous Etosha National Park.

Yes, still a park and still wild animals. Nevertheless, here the savanna is next to the pan, an immense white salt desert similar to the one of our misadventure in Botswana (see Episode 26 : Stuck in Botswana more than 100 km from civilization)
We leave for two days of hunting with one night in the park. It will surely be the last of our road trip in Africa. Maybe the last opportunity to meet the rarest species. We hope to see leopards, cheetahs and rhinoceroses up close. As far as rhinos are concerned, we are served. At nightfall, they take turns at the campsite watering hole to quench their thirst. We do the same on the other side of the fence that protects us. We have planned a beer, wine and an aperitif to stay for hours to observe the animals.

The next morning we find the rhinos in the middle of the budding karroo acacias. The tracking of the felines is not very successful. It is the law of nature!

#28 Meeting with the beautiful women of Himba tribe

#30 Southern Namibia and its surprising landscapes