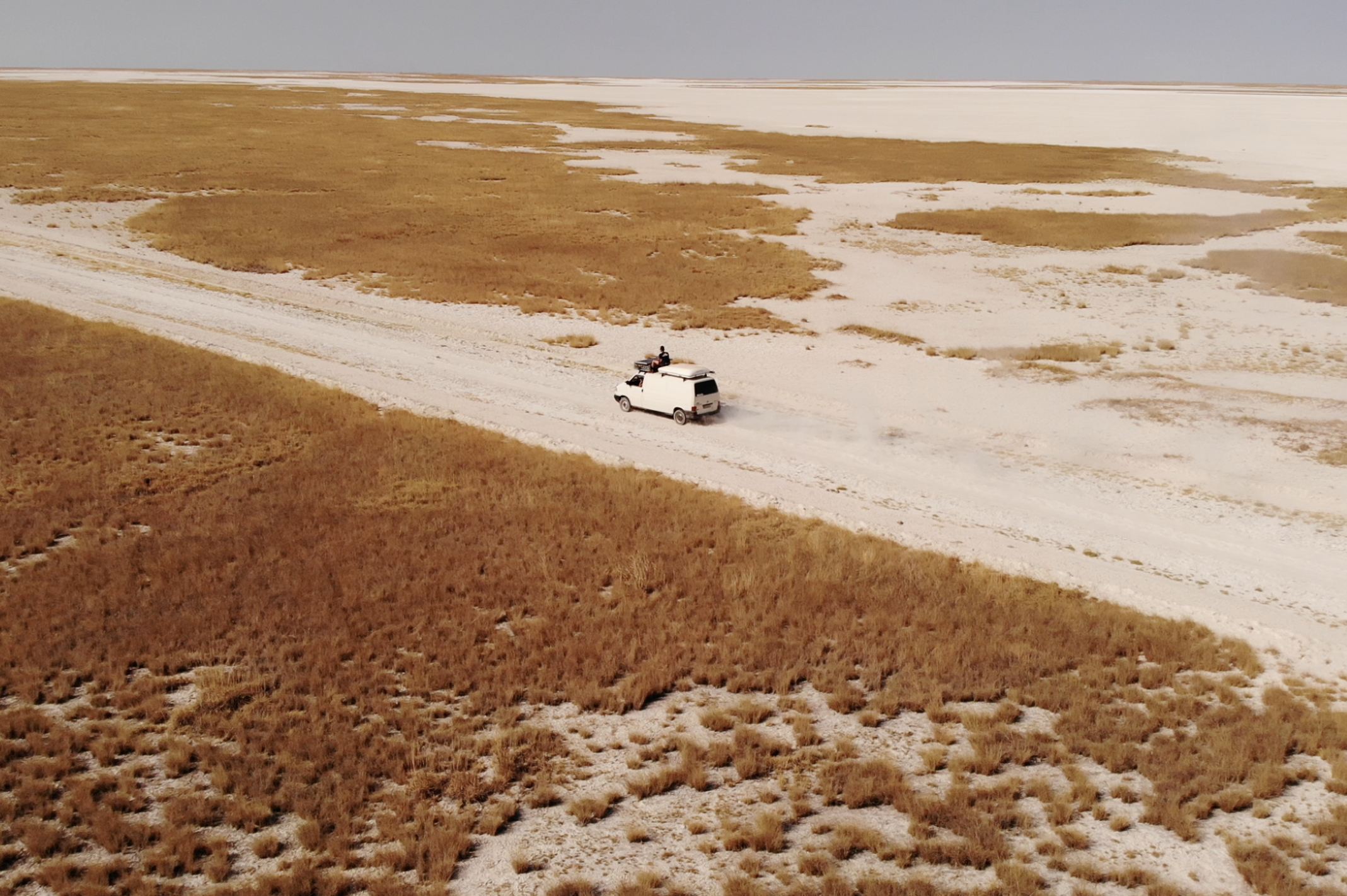 More than 10,000 years ago, Botswana had a lake of more than 60,000 km2. Since then, a large part of it has dried up to form large salt deserts, called pans. The size of all these pans combined is larger than the famous Salar de Uyuni in Bolivia, known as the largest salt desert. In the dry season, a crust of dried salt as far as the eye can see gives the illusion of being on the moon. The pan acts like a mirror reflecting the dazzling brightness of the sun at its zenith.
Before going there, we fill up with gasoline and provisions. We leave for several days in a remote desert. We also inquire about the possibility of driving on the pans. We understand that it is necessary to be very careful. The pan can seem dry but it is only superficial. The still wet lower layers can sink under the weight of the vehicle and it is then very difficult to get out of it. It is best to stay on the edge of the pan or follow the tracks already made.

Very quickly, the landscapes become more deserted. We drive in a golden scenery, along the great plains of dried grass. We don’t meet anyone, except a man on horseback and a woman with her child. Few people live in this region. The kilometers follow one another slowly on the sandy road but we remain amazed by these large open spaces of which one does not see the end. We see the first white tracks. We arrive finally at the pan de Sua. It is beautiful! White as far as the eye can see. We drive a little, just enough to choose our spot for this evening.

Before we step onto the pan, we are vigilant. After all we have read, we do not want to get stuck. Pauline and Valentin, shovel in hand, go to assess the situation. The pan is wet only in depth, we can drive on the edge. Perfect, our spot is validated!

We take advantage of the last hours of sun to have fun with the camera. In this immaculate white spaces, the loss of landmark is favorable to tricks the eyes.

The evening colors are magnificent. The visibility of this white desert, offers us an incredible red-orange show. The twilight splits for the biggest happiness of our eyes. Installed with a beer, we take advantage of this magic moment. The sky changes and the colors leave place to the black of the night.

The next day, to start well, even before breakfast, we leave for a jog. Running without any reference in a repetitive landscape, we lose all notion of speed and distance. Fortunately, the GPS is there to help us find the van.

We leave again to go to see another place of the pan. Excited by the breathtaking landscapes offered to us, we realize too late that the zone in which we have just entered is less stable. We must not go any further. With the stress, our first reflex is to stop. Wrong choice! By slowing down, the weight of the van has accumulated at the front, which has then collapsed. The front wheels are now buried in 25cm of clay.

Even if we spent the night there, we are lucky to have found help to get out less than 24 hours later.

We leave the pan a little later than planned, but happy to be back in civilization. It is in a camp-site in the middle of the baobabs that we recharge our batteries before starting the road towards the delta of Okavongo. A good shower is a must!

The delta is huge, it is one of the biggest of its kind; it does not flow into the ocean but on land. It is generally from July, in dry seasons, that it is flooded. At this time, the water of the rivers of Angola has flowed enough to feed it fully.

We choose to explore one of the arms, on the East side, at the intersection where it joins the community of Khwai. This is where we plan to spend the night. Located between Moremi and Chobe National Parks, the wildlife is dense. Unlike the neighboring parks, there is no entrance fee. The campsites, held by the Khwai community, allow to support the local population and to preserve this space of the park without fees.

Once installed at our camp, we must not move away. We are in the middle of the park and there is no fence to protect us from wild animals. The night falls and each of us is busy with a task: Quentin prepares the fire, Pauline and Laurène are busy in the kitchen and Valentin sets up the roof tent. While our neighbors of camping return from a game drive at the fall of the night, they stop at only 50m of us, lit headlights. We do not understand immediately, until a shadow goes out of the bush. A feline! Nonchalantly, he crosses the road and leaves in the bushes. Impossible to know if we saw a leopard or a lioness. It passed just in front of the car’s headlights, letting us only perceive a feline silhouette. Besides, we would certainly not have seen it without. Not very reassured, we start working on the fire again. We will be protected, the wild animals are afraid of it. The night is beautiful. Once again, the milky way is well visible to the naked eye. At this time, the moon only comes out late in the night, which offers us beautiful starry evenings.

Yesterday, we dropped our friends off at the airport in Maun. We did not stayed in town. In a hurry, we joined the nature in the middle of the Erioloba acacias. Its oval fruits, filled with small seeds, make a maracas sound when shaken.

On the map, we are very close to a lake. Curious to see what it looks like, we walk in that direction. We follow a small path in the sand between the trees that obstruct the view. We should have arrived but we still see nothing. We understand then that in this dry season, it is much smaller. This is what Petrus confirms to us from the top of his horse. He lives very close, we are his new ephemeral neighbors, in some way. He came to greet us. Coming from the Herero tribe, he has his origins in Namibia. The cows that we saw grazing around, belong to him. The Hereros have a rather dark past. In 1904, the Hereros rose up against the German colonization in Namibia. They were then victims of a great repression reducing the population from 80,000 to 15,000 individuals. Since then, the women wear Victorian style dresses from the 90s as a memory of these tragic events. These dresses were introduced by the German wives of missionaries and settlers who arrived in the country in the early 1900s.

Namibia is our next destination. We chose to cross the Dobe border where the San, also called bushmen, live. They are a hunter-gatherer people who lived in autonomy until 1990.

#25 Botswana and its lushing wildlife, a giant safar