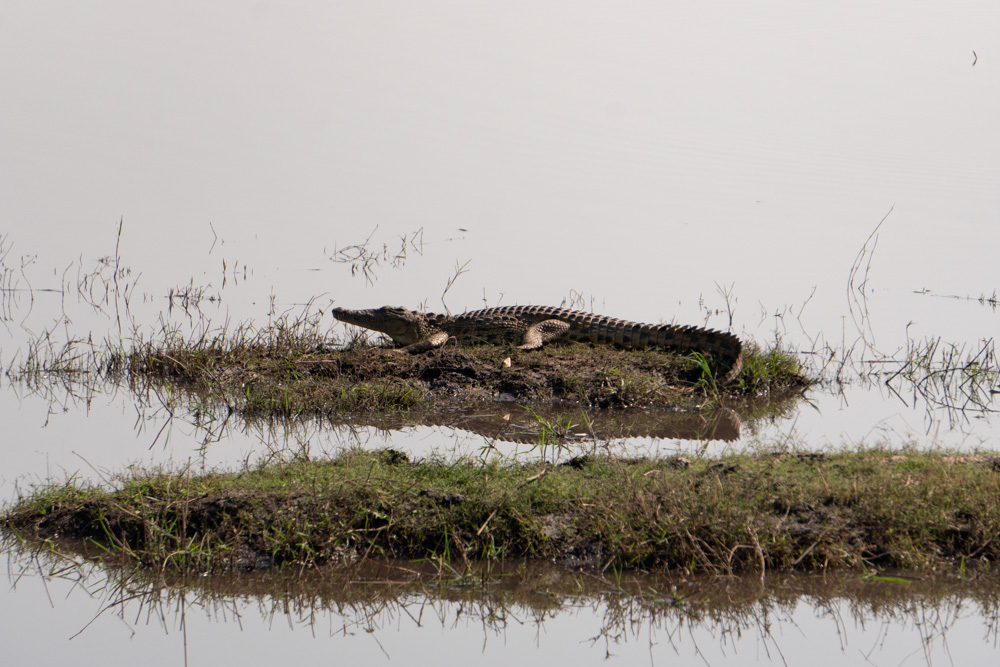 Entering Botswana, it’s a first for us, we have to cross a foot bath to disinfect the tires of the vehicle. It’s not only Uyo who goes through it, we also have to go out to disinfect the soles of our shoes. After having followed the protocol in due form, we are on the roads of Botswana.  The country is very wild, we already see buffalos in the distance.

The day is coming to an end. Before the sun disappears down to the horizon, we go to the airport and the entrance of the Chobe National Park. A first stop is necessary to recover the luggage in hold of our two guests. They had not followed the connection and arrived 24 hours later. Pauline and Quentin have little gifts for us in their luggage: car parts for Uyo and good cheese for our French stomachs.

At the entrance gate of the Chobe National Park, we glean information about the state of the roads, the price and the opening hours for the next day. 6:30 pm, it is already dark, we leave on the other side of the city to camp by the river. In the darkness, we have a hard time to find our way on this big wasteland, without too many marked roads. We end up parking Uyo behind some groves, hidden from view. Dinner is quick, we don’t have to wait because wild animals are around and we didn’t make a fire. As soon as we entered the tent, Laurène realized that the bushes in the distance had moved. It turns out that they are elephants. A part of the herd passes within 10 meters of us. No more noise, we must not frighten them. Although it is night, the full moon illuminates these big pachyderms that we observe from our windows. It is an intense moment, several emotions are mixed between excitement, wonder and apprehension that one of them comes to knock down Uyo. In a way, the safari has already begun.

It officially continues in the park the next day. The landscapes of Chobe are quite different from those we have seen so far. Deep sandy roads wind through the groves. At the river’s edge, white sand mingles with green vegetation maintained by the humidity of the banks. The view, more unobstructed, offers observation points for miles. As we drive down to the river, we see a lioness lurking in the sand on the right, watching for an impala. It crosses in front of the vehicle and runs off, disappearing into the vegetation on the left. The show is only of short duration. While leaving, Valentin sees in his rearview mirror the lioness who returns. She sits down and looks at us. It seems that she takes a break for the pictures. She is joined by one of her fellow lions. We are alone with them and enjoy the moment. A third lioness comes to add to the small pack. A safari vehicle comes to join the show. He warns all his colleagues of our find. A few minutes later we are invaded…

As for the lionesses, they start walking. They observe buffaloes and seem determined to hunt before it gets too hot. We follow the hunt from afar. The task is not easy, they are quickly spotted and at each attempt to approach, the buffalo faces and intimidates the felines with its horns. The little game continues for half an hour without success for the three ladies with long incisors. Did you know that for lions, the success rate of a hunt is only 25%? This is nevertheless higher than for animals that hunt alone.

We are amazed by the density of elephants near the water holes. They follow each other in groups like a transhumance. Hundreds of them parade through the plains along the Thebe River. In the same picture, in the background, a herd of impala cohabits with warthogs. And in the foreground, giraffes spread their legs to graze and drink. They put themselves in improbable positions so that their heads can reach the ground.

Inland, we see for the first time a black sable antelope, its long horns curved backwards make us think of an ibex.

The day ends with a sand trap. We have to get out of the car to install the plates and push the vehicle while keeping an eye on the arrival of potential predators. This morning, the lions were along this same road. We quickly get out of this uncomfortable situation. This gives us time to admire the blazing sun coming down behind the river. The lions come back to say goodbye to us to close the day.

We return to our spot of wild camping next to the river for the night. We do not see much but we hear a hippopotamus which splashes not far from us. It is not going to be necessary to delay if we do not want to find ourselves nose to nose with him.

On our road, we cross the camping Elephant Sand. We heard a lot about it. Installed around a water point, it gives one of the best views to observe the elephants. It is a little bit of cheating because you can be sure to see pachyderms in big quantity. But it is also a good way to observe them from all sides in complete safety.

Around noon, the show begins. Families come to quench their thirst and refresh themselves in the water. We marvel at the movements of the elephants: their enormous legs collapsing under their weight, their trunk sucking and spraying water on their body, their long thin ears waving to refresh them. Very attentive to the noise, they sometimes stop in the middle of the action, like statues, to evaluate the danger. Once reassured, they resume their movements normally. They also rest sometimes around this water point. They then place their long trunk on one of their tusks and do not move for long minutes. Once they have had their fill and are covered with a mixture of water and earth, they leave in the same direction as when they arrived. They are replaced very quickly by another family. It is a regular sequence that leads us to finally see a hundred elephants.

In the evening, we make a fire to warm up and eat some marshmallows, while observing the elephants which, without a noise, continue to come to drink. It is impressive how discreet this huge animal can be.

The next day we sail south to the Salt Pan. When they are flooded, it is here that the pink flamingos come to breed.

#26 Botswana and the great wild outdoors