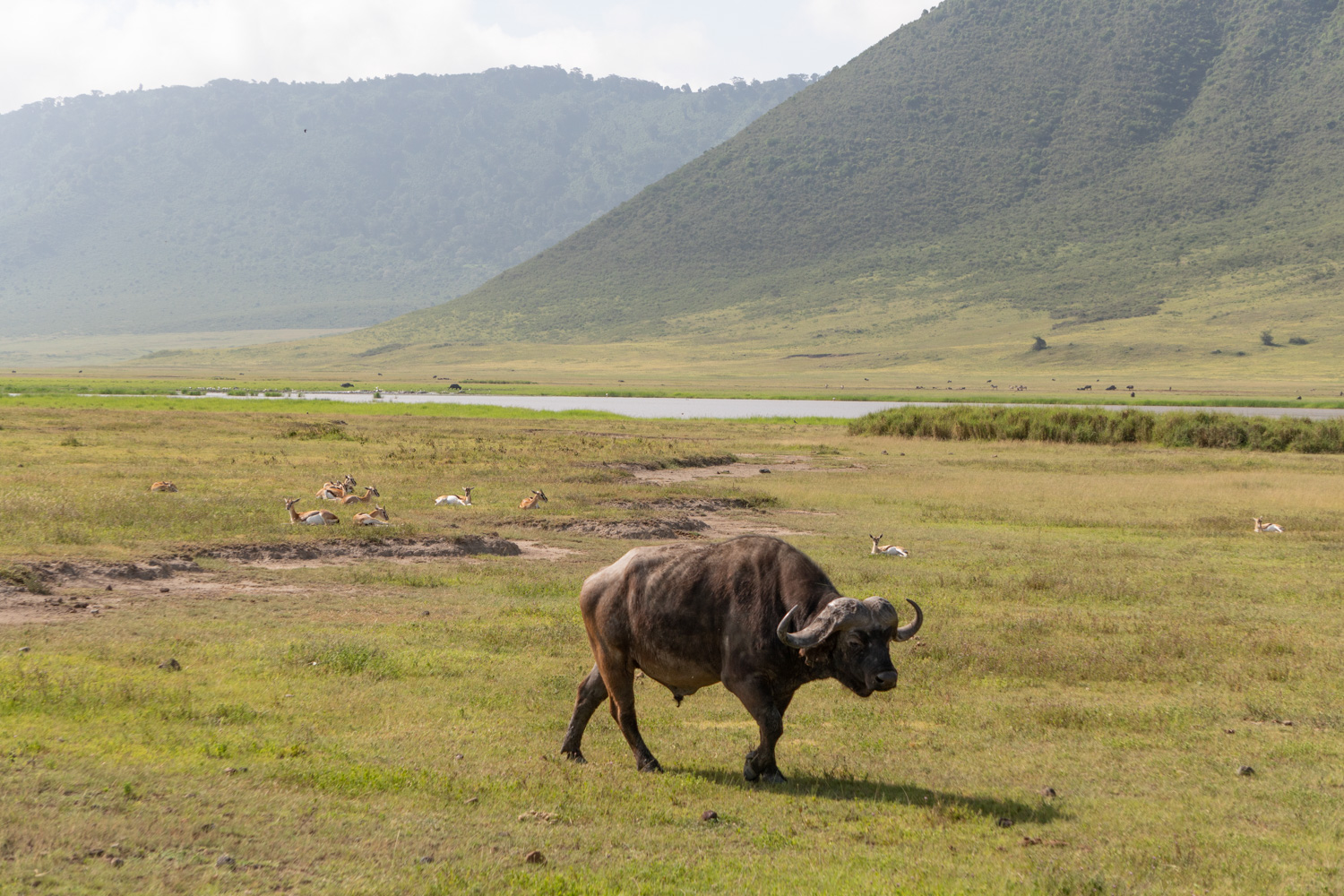 A collapsed volcano that could have been even higher than Kilimanjaro

Ngorongoro Crater is more than just a safari. Located in the Great Rift Valley, the huge crater of 32,600 hectares is an ecosystem on its own. This little jewel of nature gathers an exceptional biodiversity in a condensed space. A 600m high crown, covered with a dense forest, isolates it from the rest of the world. Inside, the surrounding jungle, gives way to an immense plain. The grass is short and the trees become increasingly rare in the center. The clear view allows us to spot animals for miles around. On the horizon, the mountain forming the ring of the crater is always visible in good weather.

The lakes of the plain gather mammals which quench their thirst, but also a whole panel of birds in particular pink flamingos, pelicans and royal cranes which we had not yet crossed.

The rhino is the most protected species in the park. Every morning, the rangers check that there are still 12 of them. Unlike the one we saw in South Africa, here they still have their two impressive horns. During the day, we observed five individuals. However they are far away and only binoculars allow to appreciate the animal more in details.

Lions also inhabit this natural wonder. After watching eight of them moving in group, we meet an imposing male. In fact, this is the first lion we have seen that we could call a “Lion King”. His mane extends over two thirds of his body. At the level of the front feet, it goes down to his elbows. In addition to being extremely dense, it is very dark, almost black in certain points. Active, this alpha male is sniffing the air with his mouth wide open in search of relatives.

On the way back, we came across a solitary elephant. He is so big that we spotted him from far away. After several safaris in South Africa, we are used to elephants. Nevertheless, this one stands out because of its massive size.

The day before, on the road to Ngorongoro, we visited Tarengire National Park. Less spectacular than the crater, it is much similar to the Mikumi park in the south of the country (see Article 12: Beautiful beaches, kite surfing and snorkelling on the island of Zanzibar). Nevertheless we had an exceptional experience in the middle of an elephants.

The rainy season does not make it easy for us once again. The grass has grown in a few weeks and the animals are less easy to observe. Zebras and Wildebeests have migrated to another park, not feeling safe in the high grass. Rodolphe is enthusiastic, he enjoys every animal we meet. He is a big fan of the savannah, he saw a lot of animal documentaries when he was little. Now, he gets the chance to see them in their natural habitats.

In the afternoon, we discover a large family of elephants. Our guide, who knows this park like the back of his hand, rushes on a small road to get closer. He does not hesitate to park as close as possible to these large mammals. In the vehicle, not a sound. The whole company is amazed but far from being reassured. Elephant charges are quite common when vehicles get too close, especially when there are small baby elephants to protect. Valentin finally managed to see a giraffe drinking, he had been waiting for this moment since the beginning of our trip.

This large family of elephants has a baby that they protect with fervor. At first hidden by his elders, he suddenly appears by taking the lead in the march. The mother’s trunk is never far away to protect him. He stops then one moment to suckle. The mother first pushes him away before stopping for a few moments for her young. It is necessary for her to be fast because less than one minute later, she loses patience and resumes her walk.

The end of the life at 3 in Uyo

Back from safari, Rodolphe fills up on spices in Arusha before leaving us at the end of the week. The three of us living in Uyo was a little bit of organization but it was a pleasure to share these good moments with friends.

After all these adventures that follow one another, we aspire to settle down for a few days. We feel the need to take some time for ourselves. Take time to be bored, take time to write. But also to continue to work on our videos, we have taken a lot of delays lately. To complete the list, we have a lot of small work to do in the van to optimize it for the travel conditions in Africa. These last weeks we have been back on the dusty tracks. Dust that gets inside the van as the kilometers go by. In Namibia this will be our daily life. So we want to improve the waterproofing of the doors and make dust catchers. The idea is to capture it before it spreads everywhere.

We are also getting ready to cross the border with Kenya in the next few days. To be continued…

#13 Visiting Northern Tanzania while being three in Uyo

#12 Beautiful beaches, kite surfing and snorkelling on the island of Zanzibar