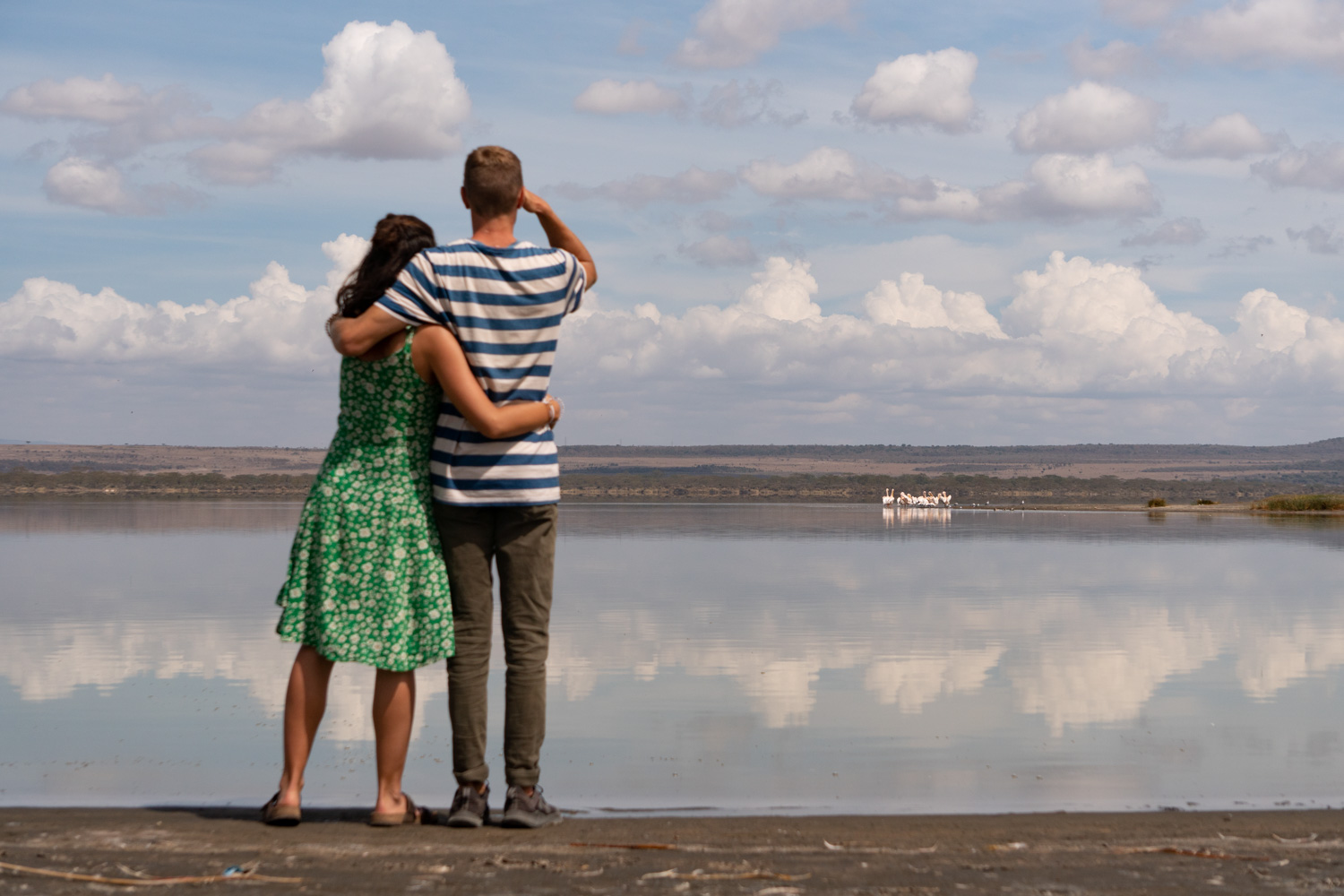 Our first days in Kenya

When we arrived in Kenya, we felt a big difference between this country and its neighbors. Kenya is more developed and the young people tend towards office jobs and offload the manual jobs. Agriculture is becoming less and less important. Kenya has to import many foodstuffs from its neighboring countries. A large majority of the production is exported outside the African continent, unlike Tanzania, which cannot afford to import as much. This neighboring country consumes all its resources before exporting. In Nairobi, there are large buildings, many shopping centers like we have never seen in Africa, especially Carrefour and large American-style housing developments. There is a great influence from the United States in the style of clothing (Jordan’s shoes) and the huge 4x4s that are the size of our van or more. In the capital, the car is king but limited to an elite that never moves without it. We can feel the incomprehension in the eyes of the locals when we go somewhere on foot while we are Mzungu (white). Some even suggest us to call a cab even though we have only 500m to cross.

Lake Naivasha is 13 km long. Since the rise of water, it is connected to the Oloidien lake in the East. This is our destination if we don’t find a good wild camp on the road before. We go along the southern shore of the lake. Everything is heavly built and privatized. Each road which leaves towards the lake leads to a house, a hotel, a lodge or a flowers farm. Large greenhouses shelter the cultivation of roses. Along with tourism and fishing, this is one of the major economies of the region. The roses are all intended for export, especially for the European market. We park at the only public access to the lake. The locals park their fishing or tourism boats there. Besides the people, the wild life is very dense around the lake. We are parked less than a hundred meters from the shore. Big birds like marabouts or pelicans are attracted by the fishing return. The hippos, very present in the lake, venture on the bank at nightfall.

In the early morning, two giraffes approach the van. They quickly run away frightened by fishermen’s dogs. Since the sunrise, locals are busy fishing. Mash will not go today. This inhabitant of the village who welcomed us yesterday has started fishing again since the decline of tourism. A group of buffalos settled near his nets. He does not want to take the risk of approaching them. The biggest danger remains the hippopotamus. Very territorial, it does not hesitate to attack anyone who comes too close. Last week a fisherman was the victim of this. Its jaws produce a force of 150kg that you can’t survive. Despite its 3 tons, it can run at 40km/h on land and more than 5km/h under water.

In the afternoon, we are joined by our friends Delphine and Louis. They arrive from Nairobi. Their reserve of diesel is running low and on their way all the gas stations were empty. Since a few weeks, the country is facing a fuel shortage. As you know, the prices at the pump have been rising recently. In Kenya, it remains very cheap, less than 1€ per liter. The price is fixed because it is sponsored by the state. Nevertheless, distributors must first buy at the high price of the market and sell at the settle price. They fear that the state cannot subsidize such amounts. So they fill up sparingly. We end up finding some in a gas station after 1 hour of queue. We are lucky because we are in the last to be served!

In the afternoon, the four of us go on an excursion on the water. Francis takes us on board his boat to discover the lake and catch fishes. While looking for a first place to cast a line, we see a family of hippos in the distance. We stay nearby to observe them for a while without disturbing them and then we leave a little further. On the banks, many animals come to quench their thirst. Zebras, giraffes, buffalos but also many birds that we can observe from a new angle, in this small fiber boat. Once the fishing spot is found, we take out our fishing rods, or rather our string with a hook to catch our dinner. The catches are not very big. Most of them are released because they are too small for our barbecue. Two good hours and a few other spots later, we decide to hit land again.

Fishermen are in the water. They move the nets by hand to gather the fish. Vulnerable, they walk and swim to take care of the nets. We buy them a big fish for tonight.

The night begins to fall and the light is superb on this small lake. All around the shore, the trees are dead, drowned by the rise of the water of these last years. It results an exceptional and contrasted landscape.

We get up early this morning because we have a very busy day. We are going to visit a national park in a different way than usual. Hell’s Gate is a park in the Great Rift region. There are few big cats in the park, so visitors can go and meet the animals on foot or by bike. It is at the main entrance that we rent our bicycles for the day. They are not racing beasts but it will be enough for today. We choose to go for the big loop, 22km. Zebras are numerous. Always so beautiful with their white and black stripes. We meet nobody on this loop. That comes perhaps from the criticisms on this uneven and climbing road, as we will read it later in the guide of the routard. Indeed, it is not simple between the unevenness, the stones and the sand which unbalances us. We are nevertheless very happy to pedal again, especially in this pretty frame.

We reach proudly the main viewpoint. But to access it, we understand that it is necessary to pay. Once again, we are disappointed. As in Tanzania, Kenya abuses tourists asking for huge sums of money for each park, viewpoint, hike… we manage to negotiate the entrance to reach the gorges and the first viewpoint.

On the way back, we run into Sophie the giraffe and her friends. Installed at the edge of the road, they eat quietly the highest leaves of the acacias. Majestic!

This morning we wake up slowly with the view on the lake. While going to the toilets Valentin sees many small pink points piled up on the water. It is a group of flamingos. Laurène also spotted them. No time to wait! We run towards the lake to observe them more closely. Under the brilliant sun, the lake of oil offers a beautiful reflection which splits birds and landscapes. The high salinity of the lake is visible on the bank. The white crystallized salt, mixed with the beige earth, creates an unusual scenery. The yellow lake, the volcanic mountains in the distance and the cactus complete the landscape. Amazed as soon as we wake up, the day starts well. The rest of the day will be productive between crafts, laundry, writing and sports. The Vervets monkeys visit us as soon as we start to cook. As soon as we turn our backs, they approach us. As soon as we look at them, they stop. This little game can last a long time. The only way to make them back off is to threaten them with a stone thrower or a rock.

After a second night, a new day begins. The sun’s rays make their way between the curtains. The coldness pushes us to stay a few minutes more under the confortable blanket. Then, we decide to emerge for the famous running session that we planned to make around the lake. Everything is still quiet. The pink flamingos settled not far from our camp once again.

We run along the lake, bypassing some campsites that have privatized the banks. The song of the birds accompanies us. The most beautiful ones have bluish collars changing color with the light. We are vigilant when we get closer to the lake. Three hippopotamuses have recently settled there. Contrary to what one can believe, they are dangerous animals, in particular the one which kills the most in Africa. Thus, we prefer to avoid any unexpected encounter. Before turning back, we see in the distance buffalos which graze peacefully on the shore. Kenya is the first country in which we see so many wild animals out of the national parks.

Once we are back, we take a good shower before settling with Uyo on the banks of the lake. The perfect place to take our breakfast. We take out the table, the chairs and what is left for the preparation of flat french pancakes because our stock of baking powder is dry.

It’s time for us to drive back to Nairobi to get Valentin’s brother. Nicolas will join us for 2 weeks and experience the adventure in a van. We aim to drive Uyo up to the north of the country in the desert region of Turkana.

#17 Amboseli, a safari at the foot of Kilimanjaro

#16 Turkana, the biggest alcalin lake in the word with its tribes