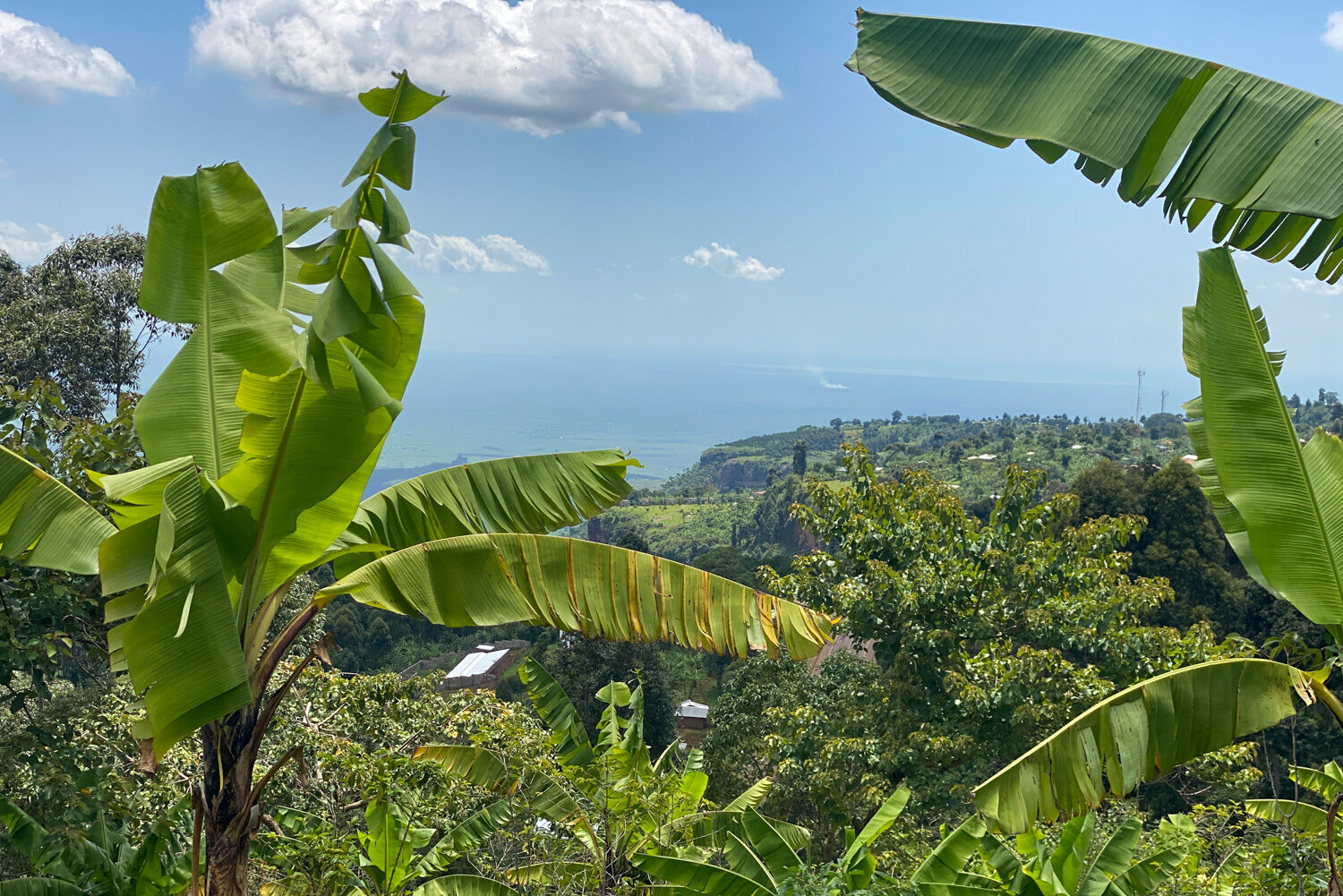 It is a relief to leave the garage and the capital. After a month in Kenya, we leave with enthusiasm toward West. Destination Uganda! As we get closer to the border, the landscapes change. We discover a very green side of the country we are leaving. The climate, favourable to agriculture, has made it a region of farmers. It is in this region that Benson is born. He is the owner of a lodge where we camped on the road to Uganda.

Benson is from the Kikuyu tribe in central Kenya. He likes to say that in his tribe, they are entrepreneurs who make the country move forward. He himself has invested in a piece of land not far from Nairobi to create a lodge and an event venue. As he tells us with shining eyes, it is his passion. He chose the land for its economic interest, close to big cities, but also for a sentimental reason. In the days of the colony, his father and mother fought for their independence in the forest above.

The border with Uganda was one of the easiest to cross. With our visa and our insurance already in our pocket, the rest of the formalities took only 45 minutes. Then, we discovered this new country. Just like western Kenya, Uganda is very green. We are at the end of the rainy season, the vegetation is at its best. What marks us quickly, it is the number of motorcycles riding all around. A real parade of two wheels that do not care about the trafic rules. These overloaded motorcycles carry everything: goods, sofas and even cows. Helmets are certainly not a requirement. Of the hundreds of motorcycles that weave in and out of the cars, less than a dozen drivers wear them.

Sipi, beyond the waterfalls

We take the direction of the mountains. We hope to settle there for a few days. The cool climate will be good for us.
The winding road leads us to the village of Sipi, known for its waterfalls. It is with the sight on one of it that we settle in a camp, at the edge of the cliff.

Village life suits us. The calm and the nature contrast with the week spent in Nairobi. The dog of the camp and her little one adopted us immediately. This last one doesn’t want to be touched, but it doesn’t prevent him from approaching us and stealing our flip-flops. We let him do it, he is so cute. Anyway, it is our hiking shoes that we need these days. First of all to visit a small coffee plantation in Thomas’ garden. Local guide, he teaches us how to make our own coffee from the tree to the cup.

The next day we follow him in down the valley and up the mountains to discover the three big waterfalls of Sipi. The first one, the one we see from the camp, is the biggest: 95m. We go down to the waterfall below before going up to a new viewpoint. Before finishing our ascent, we discover a cave. The locals come there to look for semi-precious stones to resell them later. After a quick look at the small stones, we decide to buy one of them as a souvenir. The most beautiful of course!

The second waterfall can be seen from a cave dug at the back, a few meters below, the agitated white water cascades between the dense vegetation.

The third one is doubled, it is two arms of water which fall in parallel. A perfect harmony. At the bend of a village, we taste the local alcohol. A fermented porridge made of corn and millet. The charming lady of the house, delighted to know that we are originated from the catholic church like her, serves us a large portion of this beverage. It is not yet noon, but in Africa, that does not seem to stop them. Then, we try this mixture, which they drink here like wine in France.  It is not really to our taste, but for Valentin, it has the merit to feeding. Hum… not sure that we will take it again. Nevertheless, our empty bellies appreciate it, even if it prefer the rolex that we engulf the next hour. The rolex is an Ugandan invention that can be found in the whole country. The recipe is simple: a small omelette and a chapati that we roll together. This one is luxurious with 2 eggs, tomato and onion. A treat!

When the school wall turns into a movie screen

We have a project in mind, but since our departure, we have not yet found the opportunity to implement it. In our luggage we carry our small video projector. We hope to be able to offer a projection to the school children of Sipi. Accompanied by Peter, who works at our campsite, we head to the school to meet the teachers. Moses, the main teacher, is enthusiastic. He likes the idea and thinks it will be good for the students. Together, we choose among the few movies we have in English, the one that will be shown. It will be Rasta Rocket! It is the story of 4 Jamaicans who dream of going to the Olympic Games. To everyone’s surprise, they create a bobsled team to participate. Although they have never seen snow and do not know the cold, they will overcome many challenges to get their place at the winter Olympics.

Three primary school classes sit on the floor, facing the projection wall. We tried to filter the light with fabrics and large papers. Silence is made and the projection starts. As the film goes, we begin to hear discreet laughter, then at the first fall of the heroes, the children let go and laugh out loud. It is a pleasure, especially when we see the smile of the young girls who accompany us to our camp once the projection is finished.

Jinja, Lake Victoria and the source of the Nile

We can feel the proximity of the Nile, on both sides of the road, the swamps are strewn with papyrus. During a detour, we will discover Lake Victoria, the largest in Africa, shared between Kenya, Tanzania and Uganda. Then, we finally arrive at Jinja. It is there that the famous river takes its source, in the lake, before ending in the Mediterranean Sea in Egypt.

It is a little north of the city that we find refuge on the banks of the Nile upstream from the dam. Built 12 years ago to produce electricity, the hydroelectric power station has radically changed the landscape. The water level has risen by about ten meters. The water covered the waterfalls, the rapids and the houses on the bank. Nevertheless, the area remained very touristy for the class 1 to 6 river activities that now take place below the dam.

We make do with the new calm part to put our kayak back in the water. Although Nile rhymes with crocodiles, there are none in this part. Laurène is reassured. We leave facing the current to be sure to come back without any problem. The profusion of birds is impressive. The Nile and the marshes of Uganda are famous worldwide for ornithology. The kingfishers are the most colorful, although one of their species is black and white. The African anhinga resembles a cormorant with a long thin bill. We often find it perched on a branch in the sun, drying its wings. The biggest one we observe is a member of the stork family. Black with purple reflections, it is called African open bill.

It is while going along the green bank that we see most of them. Other animals are also showing their faces. A monitor lizard does not hesitate to get into the water to hunt crabs. Higher up, perched in the dense trees, we meet the red-tailed monkey. On the Nile, the fishermen fight against the current to cross from one bank to the other. Some passages are tough and require a big boost to pass over, sometimes we almost stand still.

After more than 4km of struggle, we find a small island for lunch. A fisherman and his wife live there. At least, the time that the man catches enough fish to sell at the market. A makeshift shelter serves as their room for the night. It looks like a tent made of wood and recycled cloth. Above, the trees protect them from the sun. Many birds have taken up residence in the tree that houses the couple’s hut. The branches are covered with nests of small parakeets. The small yellow and black birds gravitate above the head of the lady who listens to the radio. The man is in the water, in his boat 100 meters away. He interrupted his fishing to come and greet us. Between two mouthfuls of Chapati with avocado, we observe the other fishermen and the birds.

Upstream, the Nile becomes more and more powerful as we approach the dam. The desire to play a little with the force of the river passes us quickly. At the moment of re-embarking, we discover the right bladder of the kayak well deflated. Valentin suggests to paddle the 4km with the current in the back to get back. Laurène is not very reassured. What if the boat takes water? She imagines it sinking in the Nile and why not, the crocodiles that come back. Two thirds of the kayak are still well inflated. There is no need to worry, but let’s stay close to the shore. We are slower to move forward and maneuver, but we arrive at our destination. We look at the leak, verdict, the sun has melted the glue at the front of the boat letting a net of air escape. The next day the problem is fixed, we hope that it will hold.
The test will be for later, we have an appointment in Kampala the capital to discover a technology that masters the sun, at least its rays …

#20 Chimpanzees in the rainforest and Lake Bunyonyi 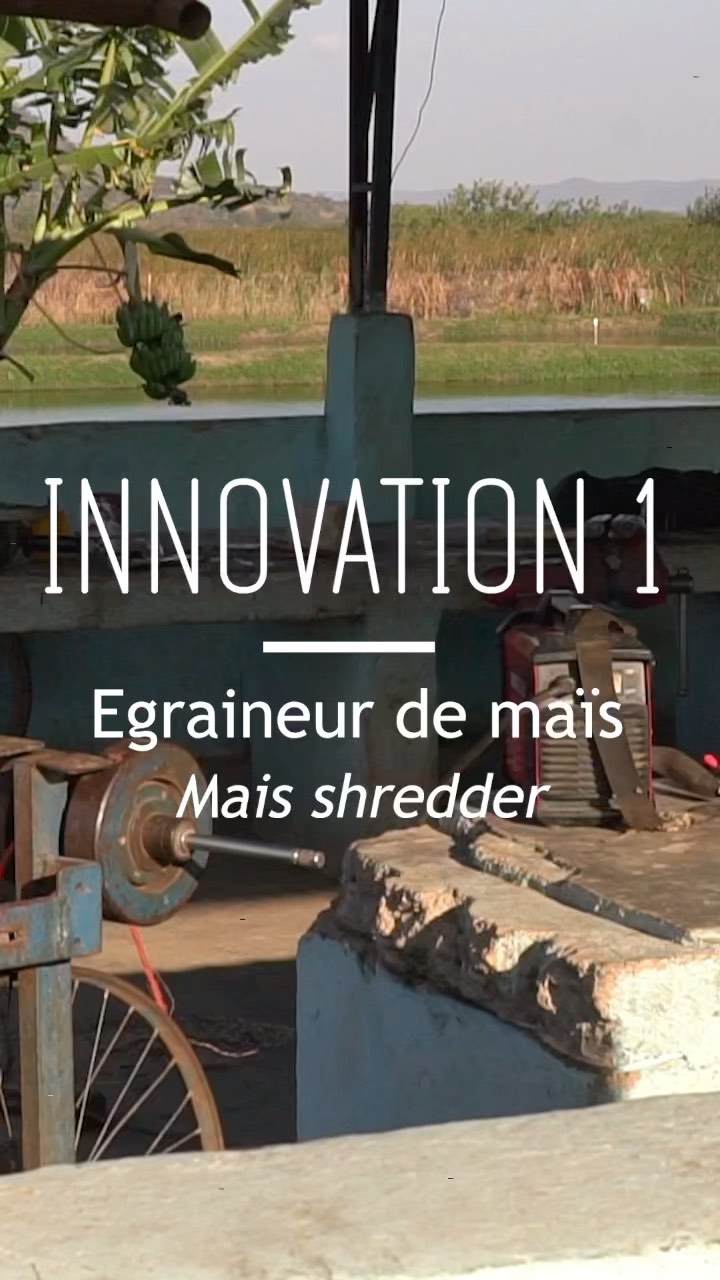 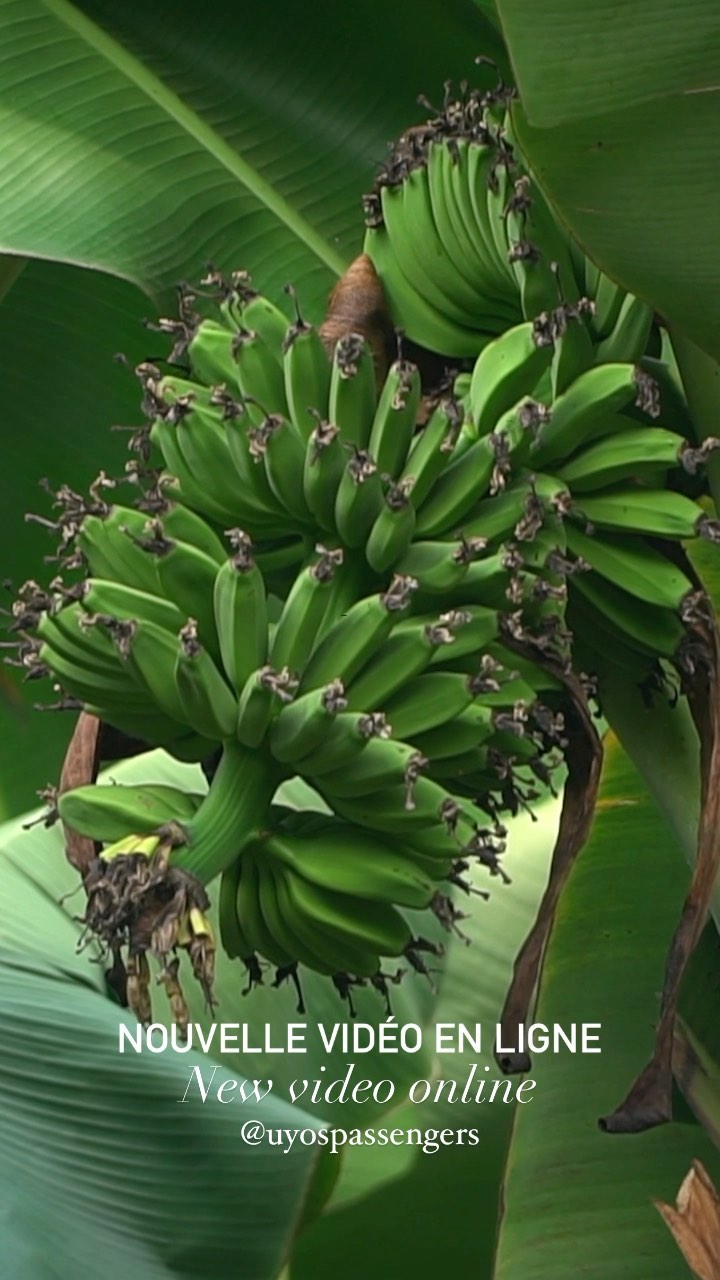