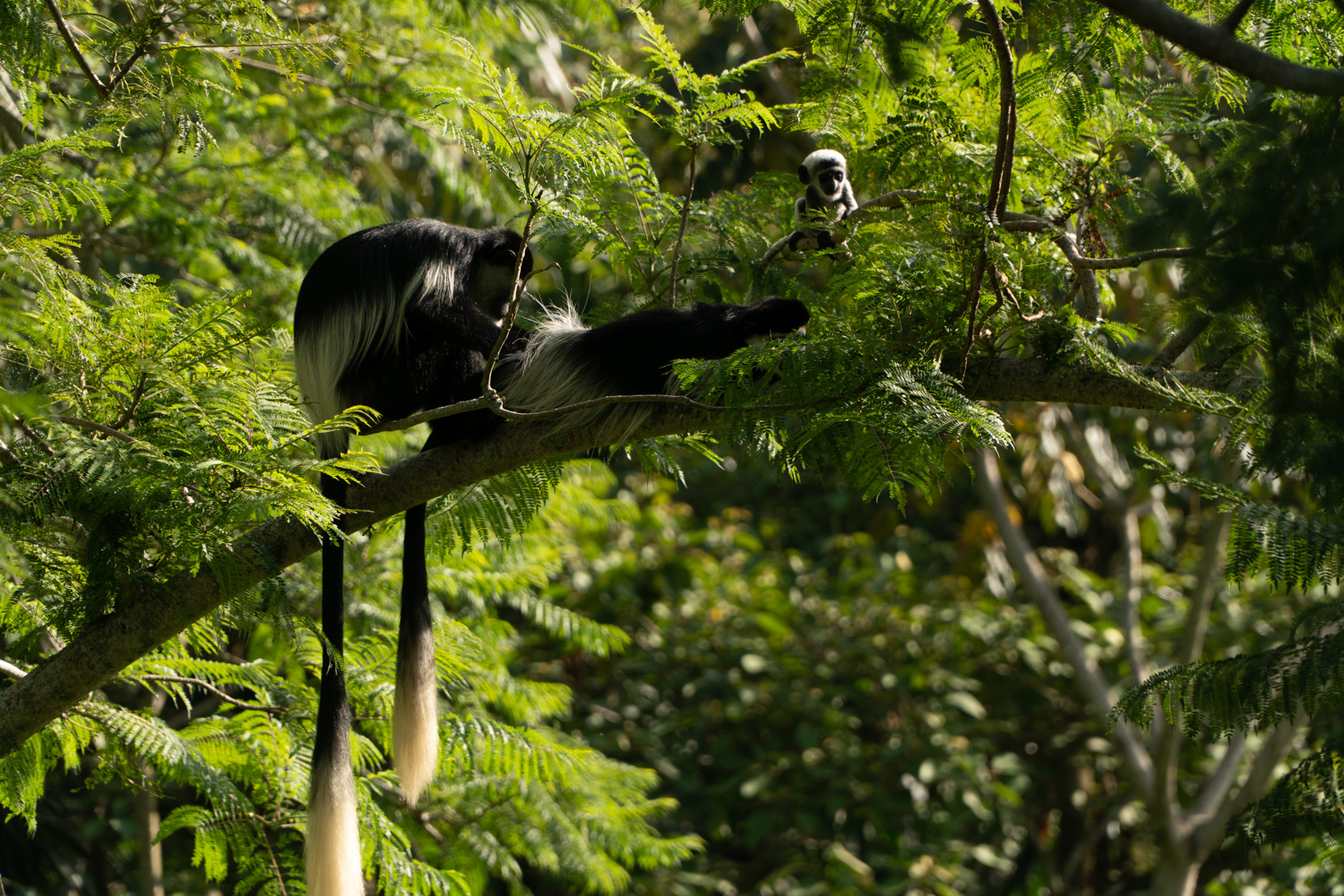 A landscape shaped by hills and crater lakes

We follow the GPS to reach the region of the crater lakes.  Between the hills, they are hundreds to fill the craters of the region of Fort Portal. In the last kilometers, the GPS makes us take a shortcut between the tea plantations. The small green bushes that covers the lands for kilometers offer us a magnificent panorama. They are all the same height, chopped by the workers who harvest the young leaves. On these plants with different shades of green, only the light green leaves are harvested. We find the tar road a little further. In the meantime, Uyo has been repainted with red soil after crossing a large mud puddle.

Wanting to avoid new water crossings, we choose a new road that the GPS suggests. Despite our expectations, the road turns into a dirt track. No water this time, but hellish climbs in the hills. The road becomes narrower and narrower, until it becomes a path in the middle of banana plantations. It is after a particularly tight passage and close to the void that we stop to think. We are still far from arriving at the end of the 7km at this speed and we do not know what the road still reserves us. We end up taking the decision to turn back. Why venture into this passage when there is a decent road? Once again, we have been fooled by the GPS which knows very little about the small roads of Africa. The half-turn is far from being a simple formality on such a road. Nevertheless, we end up getting out of it.

A few minutes later, we are installed in a camp held by the community. It is located on the edge of a small lake, on the heights of a crater. Between us and the lake, a natural forest, dense and varied, shelters numerous species of monkeys. In particular, three families of Black and White Colobus and one family of Colobe live nearby. It is the black and white ones that welcome us in the tree at the entrance of the camp. Their long tail is impressive. It ends in a mass of fine white hair. The newborns are all white, only the head remains black. As Laurène said, they look a bit like sheep.

Very early in the morning, we are awakened by their startling cries. These are calls between the families to make sure everything is okay. Once the vocal exchanges are over, we go back to sleep. It’s only 3 am anyway. We want to be in in good shape tomorrow. We plan to go hiking around the crater lakes of the area. We can see up to eight of them if we walk well.

As we progress through the country, we learn the basics of the local dialects. In Uganda, each region speaks a different language. So we have to learn again the greeting formulas at each stopover: Thank you, hello, I am fine, etc… These little words are magic formulas. Immediately, people’s eyes change when we greet and thank them in their native language. In a new region, our first meetings become our teachers.

On our way, leading to a new crater, we meet Suzanne who teaches us the basics in her language. She sells her 5 hectares land above a lake and wants us to visit it so that we can talk about it around us.

Back on the road, we drive towards the South West of the country and the famous Queen Elisabeth National Park. A small sign indicates that we are passing under the Equator. The main road that crosses the park allows us to glimpse animals. Several small roads giving access to villages also allow us to go there for free.

We have spotted a trail leading to Lake Edward. By camping near the village, we will have a chance to observe the animals coming to drink. In the last few kilometers, the dirt road becomes a trail through the bushes. As we approach the lake, the road becomes wetter and wetter. Nothing insurmountable for Uyo. But the technical passages begin to follow one another and we are not too much in an adventurous mood today. At least, not ready to get stuck in a mud puddle. Too bad, we turn back. We have other options.

Finally, we find a lodge which has a piece of land with a beautiful view on the canal of the Lake Edward. After a quick negotiation, we are allowed to sleep there. However, the employees don’t seem to understand why we prefer to settle down outside the parking lot, even though it doesn’t have a view on the canal. From the field, the breakthrough between the dense vegetation allows us to see the water in the distance. A few fishermen’s boats are sailing gently on these calm waters. They try to make us change our mind by informing us that wild animals are walking around at night, especially hippos that come to graze on the field. After 7 months in Africa, this does not scare us. We know how to be vigilant. We eat before it gets dark, to quickly climb into our observatory aka our roof tent, hoping to see animals before it gets dark.

It is in the middle of the night that we are awakened by rumination. Thanks to the flashlight, we discover a massive hippopotamus and its young. After a few moments, they start to run. We knew that these animals could run fast, but we were not prepared for this. We have the feeling to be surrounded by a herd of galloping ponies.

The next morning, we meet Colin, the owner. He invites us to walk to the canal to see if the hippos are still there. When we arrive on the bank, the noise of our steps disturbs a crocodile which is lazing on the sand. We see him getting into the water. From now on, only its nostrils are visible, and from time to time, its eyes appear. It is joined by a group of hippos already in the water. Probably the ones responsible for the noise of last night. Colin urges us to go back to the camp. It is soon noon, and we are on the path used by the animals who come to quench their thirst at the hottest time of the day. While leaving, we mark a last pause. The crocodile is on the move again. It swims towards the bank and comes out of the water slowly. We have all the time to observe the pointed scales along its tail. What a beautiful spectacle!

We leave the camp, smiling, towards new adventures.

#18 Along the water in Uganda: from Sipi Falls to the source of the Nile

#20 Chimpanzees in the rainforest and Lake Bunyonyi