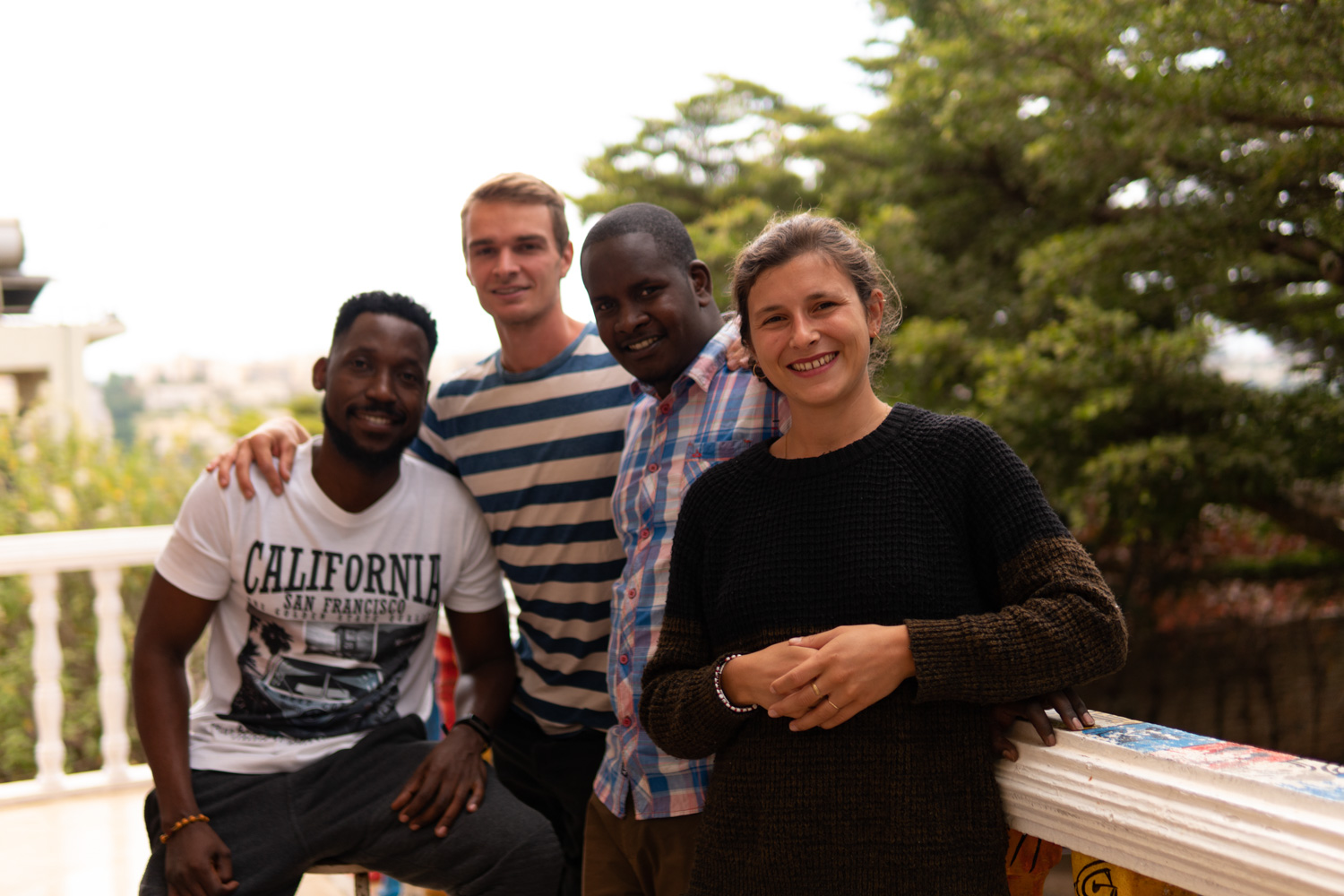 A night in the parish

After a week of relaxation on the shores of Lake Kivu, we take the road again to reach Kigali. The night begins to fall and we still do not know where we are going to sleep.  The curves are following one another but the road is always lined with houses. It is difficult to find a small space hidden from the locals. Then, at the bend of a curve, we see a beautiful and big cathedral. It seems to be illuminated. Laurène jumps out of the van to meet the priest and ask him for hospitality. We meet Father Jean D’amour who runs the parish, he receives us with wide open arms. He is very happy to meet French people. He lived a few hours away from Paris for 3 years during his training and has very good memories of it. He speaks our language perfectly.

It is Sunday, we wake up from a sweet night. Invited by the priest to one of the two morning masses, we take part in the one at 10 am where several baptisms are celebrated. We feel watched. Since we are sitting, half of the parishioners are watching us. In Africa, there is no embarrassment in watching people. Even if we hold their gaze, they are still watching us. Proximity doesn’t change anything. I challenge you to look the little girl sitting next to Laurene straight in the eye. She never looks away. No matter how hard Valentin tries, he gets bored long before she does.

A week full of nice meetings

Arrived in Kigali, we go back to the Mamba hostel to stay in the parking lot at a lower cost. But we find the door closed. It is at this moment that we meet Egide. He invites us to settle down on the parking of the restaurant opposite, where he works. Although he is only a guard, he took care of our reception and made sure that we were well installed, with an access to the toilets.

Egide speaks French very well. We talked a lot together. As a former soldier, he knows the history of his country well. At the beginning of the genocide, he witnessed the French troops who withdrew despite the atrocities that were already taking place. After the genocide, he was sent to the Congo (DRC). In 1996, the new government went to war against those responsible for the genocide who had taken refuge there. In the process, he saw the Congolese mines being looted by his country and its allies. He saw whole containers of ore leaving every day for Rwanda at the expense of the Congo… This accumulation of wealth financed the beginning of the rapid development of Rwanda. To live peacefully in Rwanda, he does not want to oppose the government by pointing out its dysfunctions. Fortunately, even if it is not an example of freedom of expression, the government is working to develop the country rapidly. The objective of the new government is to fight against poverty in order not to be carried away by the past. It has put in place several programs to lift people out of poverty and free them from dependence on international aid.

“Made in Rwanda” is a program that encourages the population to buy locally made products to support the country and its development. For example, used clothes from Europe are no longer imported to develop the fashion industry and the local economy. The money stays in the country instead of financing foreign companies. Rwanda is developing industries: iron, concrete, fabrics… At the same time, “Home grown” solutions is another program that makes sure that international support is invested in the country’s resources and new industries. They will then be managed autonomously and as a source of income.
In addition, laws and administrative procedures have been simplified to make it easier for foreigners to invest and for locals to set up businesses in the country. Rwanda also allocates research permits to countries that have expertise in specific areas. For some years now, the government has been pushing education to be as technical as possible, in order to develop technical skills (carpentry, welding, tailoring,…) that add value. But also to avoid having only a university education without enough professional outlets. Finally, today, Rwandans are encouraged to think about the future and to save in order to save.

Back at the restaurant, it is on this same parking lot that we meet Emmanuel, a few hours after Egide. He rents a room here when he has business in Kigali. And business, since he became an attorney in 2014, he has a lot of it. Like Egide, he speaks French. In September, he will travel to France, to Besançon, to perfect his skills at the linguistic university for a few months.

Emmanuel is happy to meet foreigners. He talks to us with enthusiasm about his association “Hands in action”. He recently created it to participate in the development of the country. He wanted to find solutions for the reconstruction of life after the genocide. He was marked by the widows and orphans deeply wounded by this event. He provides legal assistance to the most destitute. He also supports women and children in the communities, particularly through education and the reinforcement of agricultural training.

In 2009, the first actions consisted of providing school materials and goats. Since then, he has been working with the village chiefs or cells to identify the people who are most in need. To finance the association, the members give a little money every month. An American woman has contributed with donations in the past, but today only the members finance themselves.

Emmanuel also tells us how Rwanda managed to recover after the tragedy of 1994. Paul Kagame, the head of the RFP, who took over and stopped the genocide, forbade the population to take revenge. Revenge would only stir up hatred. Rwandans must work together and forgive each other.  Survivors must live together and unite, both perpetrators and victims.
The main factors that helped Rwandans to reconcile are :

Through his association, Emmanuel wants to bring people to understand this reconciliation process, which could be taken as an example. He wishes to offer volunteer work to help people discover this history and create a sharing of experience. He is looking for candidates who could share their knowledge in the fields of education, agriculture or health.

The art gallery of friends

Again and again on the parking lot of the same restaurant, a few days later, we meet Sam who invites us to his place. In 2020, in the middle of Covid, he transformed his big house into an art gallery: Inshuti gallery. Inshuti means friend and the place is well named. Every day, friends meet there for a game of pool, a beer, to paint in the studio or just to chat. We meet many people. Thirteen artists are currently exhibiting in the gallery. We are surrounded by creators. Isaac, the tailor who sells his shirts and ties, Maryam, Iranian who paints or Rebecca who sells her handmade creations in the souvenir store. The latest is a pair of wooden earrings carved in the shape of a gorilla.  Billy runs the bar with his sister who opens a few more beers for us each day.

Friday night. We meet Hannah, Sam’s girlfriend. She is a TV and radio journalist, and knows all the places to be in the capital. She has the intention to make us discover some of them. Accompanied by Sam and Maryam, we drive to the opposite hill, in the Muslim district. We discover a crowded pedestrian street. We slalom between the tables and chairs to make our way. Here, every little house is a restaurant serving local food and spiced tea. At the end of the street, a stage with local singers warm up the atmosphere. This small street is full of life and energy, we like it. We find a table for five and Hannah orders for everyone. The principle is to share a big dish and eat with your hands. We receive then an enormous dish of a divine rice pilaf, covered with pieces of beef melting in our mouth. It is without hesitation one of the best dishes we have eaten in Africa so far! And for a mouthful of bread!
We continue the evening in another pedestrian street, out of the Muslim district. All the youth of Kigali meet there to drink and party. On one kilometer, we find many bars and several stages with DJ or artists.

Inshuti sees many visitors passing by, we meet more and more people. On Saturday, it’s live painting and live music. For one evening, we take ourselves for artists. Two of us paint a picture inspired by our trip. We shape Africa by a gradient of black, brown, yellow, red and orange. In a way a mixture of colors that we find along the roads. Around the continent, there are words written in all the languages we have learned this year. We will finish it later by adding the names of great encounters we made in our travel on the perimeter of the canvas.

As soon as we clean our brushes, we meet Afghans. Among the five, two are researchers. They had to flee the country after the Taliban coup. Being a former government employee could have cost them their lives or, in the best case, the loss of all their belongings. Repatriated by the United States, they are now professors at the University of Kigali in Rwanda. This is a transitional position before returning to the United States this summer. These people are incredibly kind. They make us want to visit Southeast Asia.

We are well settled and having a good time at Inshuti but it is time to leave. We already postponed our departure of one day to enjoy a little more our friends and to rest from Saturday party. We went out to a concert at the arena. A brand new hall looking like a replication of the Hartwall arena in Helsinki. We discovered new singers like the Nigerian artist Tekno, an undisputed star of the continent. The crowd was delirious and the atmosphere was great.

Monday afternoon, the crossing of the Tanzanian border ends our stay in Rwanda.

#21 Rwanda the little country of a thousand hills