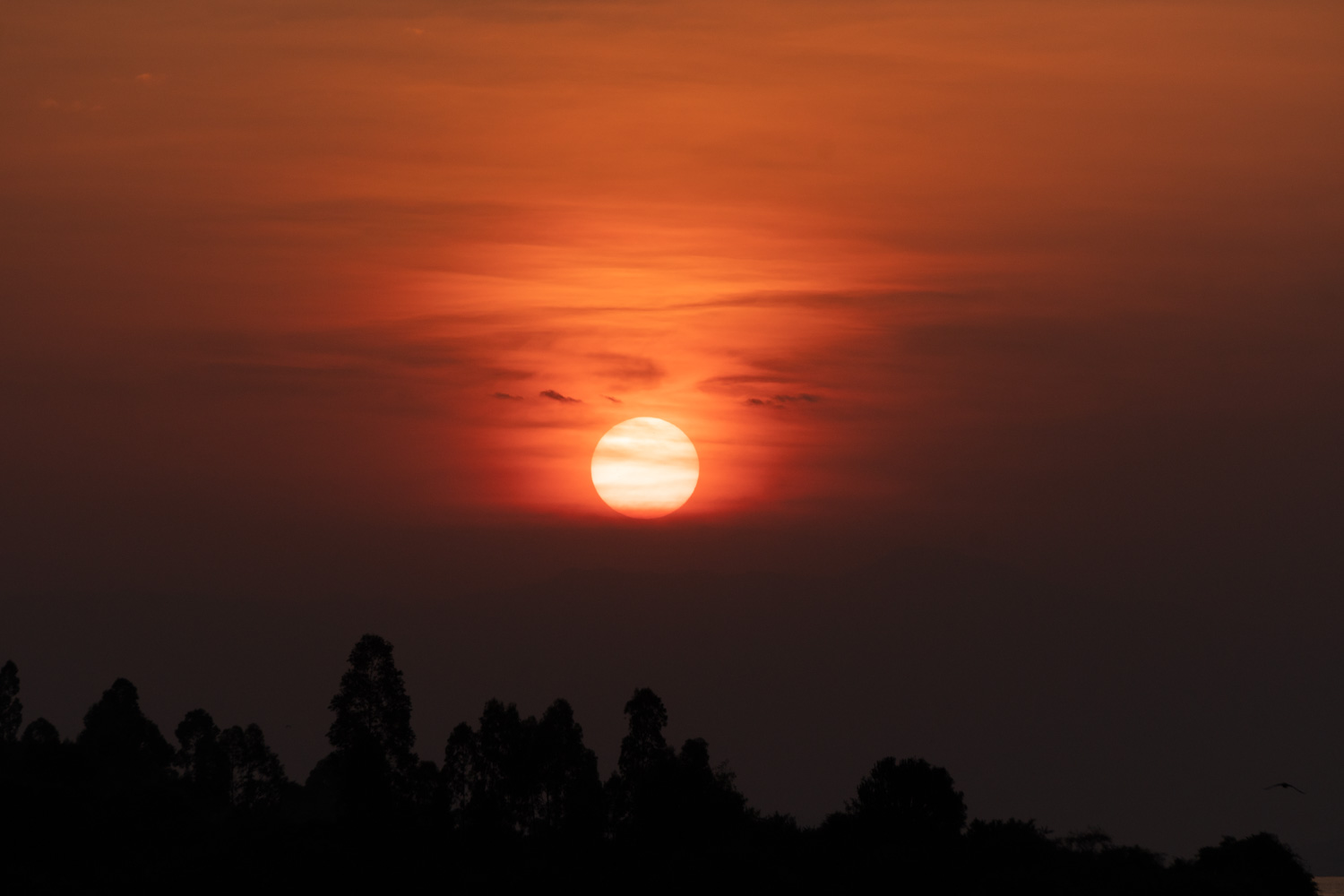 We just arrived in Kigali, capital of Rwanda. The border crossing was a mere formality. We spent more time eating in the van, in the parking lot and using our remaining internet data, than in the immigration and customs offices.

Rwanda being a small country, we quickly reach Kigali. We easily understand its nickname of country of a thousand hills. The road winds between these small mountains following one another. The hills are covered with crops, which is not surprising considering the high population density of the country. It is only at the entrance of Kigali that we are slowed down by the traffic. This gives us time to observe the streets better. Contrary to the other big cities of East Africa that we visited, Kigali is very clean. There is not a piece of garbage lying around in the gutter. From what we read, single-use plastics have been banned. The law comes with a stiff fine ($50) for anyone who throws plastic waste into the nature. Moreover, this city is equipped with modern infrastructure. Rwanda is the most developed country in Africa in the last few years and it is still going strong.

We are curious to learn more about the reasons for this. As far as we know, this small country has few natural resources unlike its neighbors.

We set off to drive the country’s roads to the south, towards Butare. The king’s palace is located in Nyanza. It was built by the colonists in 1930. Now restored as a museum, we learn that the king was a nomad. Then, with the colonization, he settled in the palace.

The king lived in a hut similar to those of the people, except that it was larger and that three peaks on the straw roof differentiated it. This hut was surrounded by about fifteen others, all of which had a particular function to satisfy the king: milk storage, beer making, accommodation for the healer, etc.

We meet the royal cows. These cows with endless horns are sacred and only their milk is consumed.

In the early 20th century, the Germans first colonized Rwanda, which was then ceded to the Belgians after World War II. To control the country, the colonists first turned to the Tutsis, who were the wealthy class at that time. A person with more than 10 cows was a Tutsi, with less, a Hutu. The ethnic division was invented by the colonists in the aftermath of World War II.

The king at this time, a Tutsi by virtue of his social status, did not appreciate the arrival of these foreigners. Faced with the pressure of the colonists, he was forced to flee. His son succeeded him by accepting the religion brought from Europe: Catholicism.

The colonists were not able to run the country freely, however, because of numerous disagreements with the Tutsis. They then became close to the Hutus, the majority in the country. The church and the settler government constantly imposed new norms, rules and ideologies on the local population.
Ethnic identity cards were introduced. For those whose ethnicity was difficult to define, the size of the nose was used. According to the settlers, Tutsis were slender with small noses. Hutus were small with big noses. Some Tutsis escaped death because of their big noses and so on. The currency also arrived with the colonists. It was the colonial currency. In this way, the colonists tried to rule the country in the same way as the king.

The visit to the Murambi memorial on the Tutsi genocide in Rwanda is overwhelming. To go back in history, the Hutu hatred towards the Tutsi was influenced by the colonists. It was a lever of division to better control the country. From 1959 to 1994, many tensions took shape between the “ethnic groups”. Discrimination led to mass killings of Tutsis over the years.
To learn more, at the end of this article, we look back at the highlights of this not so funny period.

Western Rwanda is bordered by Lake Kivu. It offices as a natural border with the Democratic Republic of Congo. We reach it from the south through the Nungwi forest. At the entrance of the forest, the hills of tea cultivation fade away at the edge of the trees. We spend the night on one of them. On the horizon, the dense forest goes on and on.

The next day, we meander on the road through this green gradient. No other cars in sight. Nevertheless, we are not alone. We cross a new species of rare monkey, the Hoest’s Cercopithecus, which adds to the list of those we have seen for eight months. Another species more known, a human being, known as military. At regular intervals, small patrols of two soldiers, with helmets and guns slung over their shoulders, walk along the road. They monitor the roads in the region near the DRC. The relationship between the two countries has been a little tense lately. There have been clashes between the DRC and the M23, which has recently taken up arms again.

Turn after turn, hill after hill, the panorama starts to change. We find again field of crops and small villages, until we see the lake. We reach the water to settle on the bank. The site belongs to a lodge perched on the heights of the lake. At the bottom, they have a bar with feet in the water, literally. The small round tables sheltered by red umbrellas extend to the water along the beach. It is the beginning of the weekend, the locals come here to drink and swim. They also serve small fried fish from the lake that we will taste tomorrow.

The water is warm, we got used to go swimming every morning. The last day, we go a little further to the island that Valentin had visited by kayak. On our last day, we photographed many birds. The day before, the new movie The Velvet Queen from Vincent Munier inspired us. Since then, we pay even more attention to the wonderful wildlife around us.

We continue our stay in Kibuye further north, in the middle of the lake where it widens. Here too, the birds are present. A kite lives in the tree above us. Every morning, we find the same birds in the same places. The kingfisher on its branch, the parakeet which comes to nourish the nest, the hummingbird which enjoys the sweet flowers. Our location offers a splendid view of the lake. Mounds of trees form numerous islands. At sunset everything turns golden. The fishermen in their canoes prepare for the night, the cormorants return from the sea and we go to the kitchen.

In the morning, you have to get on the water early to kayak on flat peaceful lake . As soon as the sun’s rays start to heat the water, the wind picks up, waves rise and the birds leave. This is the end of the poetry until the evening. It is also an opportunity for us to walk to the town of Kibuye, four kilometers away. The market is located in a large concrete building, yellow and blue painted, open to the outside. The three floors are home to all types of vendors, each small store has its own specialty. We are interested in the fabrics of the local tailors, and the fruits and vegetables.

Since 1959, propaganda was put in place to dehumanize the Tutsis, to revolt the Hutus and to prepare the genocide. At the time, many Tutsis fled to neighboring countries. After a few years of appeasement, in 1975, Rwanda obtained its independence without using arms, unlike its neighboring countries.

The government spreads the ideology that the Tutsis are harming the well-being of the Hutus like “snakes whose heads must be cut off with impunity”. With the help of the media and the church, it succeeded in turning the population into killers.
In 1993, the Arusha peace agreement was signed, pushed by the neighboring countries in order to put an end to the attacks. On the night of April 6-7, 1994, the plane carrying the Hutu president was shot down. The Hutus then accused the Tutsis and the genocide began at once. This was only an excuse to act in a more legitimate way. In one hundred days of genocide, more than one million people were murdered. The international community was aware of this project but did not want to get involved and take part in this “ethnic war” (a word used to minimize the importance of the event).

The Murambi memorial in the south of the country was built on the ruins of an unfinished school. Located on a small hill, it was here that the local authorities gathered all the Tutsis pretending to protect them. Quickly, these 50,000 people were cut off from water and life, to be weakened before proceeding to a planned genocide. On April 21, 1994, from 3:00 a.m. to 12:00 p.m., they were killed, by manipulated locals, with machetes and farming tools. They were hit on the back of the neck to “cut off the head of the snake”.

Pits are bulldozed to hide the massacre as quickly as possible. This school was not chosen randomly. Overlooked by higher hills, only two people managed to escape without being seen.
Later, when the French Foreign Legion intervened, it was here that they established the headquarters of their Operation Turquoise. Officially, the operation was set up to put an end to the genocide that had already begun three months earlier and to protect the survivors. Until now, France had turned a blind eye by supporting the regime that orchestrated it.

Unofficially, the troops are there to support the government and repel the RPF, an armed group of Tutsis who are fighting the Hutu army to end the genocide. The RPF, which has taken refuge in English-speaking Uganda, is made up of Tutsi refugees since 1959. France fears the strategic loss of French influence, whatever the cost to the local population. Between 1990 and 1994, it is estimated that the French helped the Rwandan army grow from 5,000 to 50,000 armed men. Although it helped save Tutsis in some areas, the French Foreign Legion covered up the escape of those responsible.

We finish the tour of the museum with the most difficult part; the visit of the chambers where hundreds of victims’ bodies are kept in lime, so as not to forget. Approximately 50,000 others still lie next to the building in the mass grave. It is with bitterness that we learn that the French soldiers occupied their afternoons by playing volleyball on one of these mass graves still warm with decomposing bodies. At night, some soldiers did not hesitate to rape Tutsi survivors in groups, even though they were under their protection.

Today, the perpetrators and killers of the genocide have been tried and continue to be tried when found. Nevertheless, many are still hiding in the eastern DRC. Belgium and the United States have expressed their apologies and regret for not having acted, turning a blind eye to the genocide. Nevertheless, the French government, true to its reputation of not admitting its mistakes, leaves a wound still open. In 2022, it still has not officially apologized. During his visit in 2021, Emmanuel Macron acknowledged for the first time that France had responsibilities. This was a first step, yet he did not make an official apology.
We are disgusted to know that the French rapists of the legion who were the age of our parents have never been judged and continue their career in the army.
Today, when we leave this museum, being French is not a source of pride, we are almost ashamed…