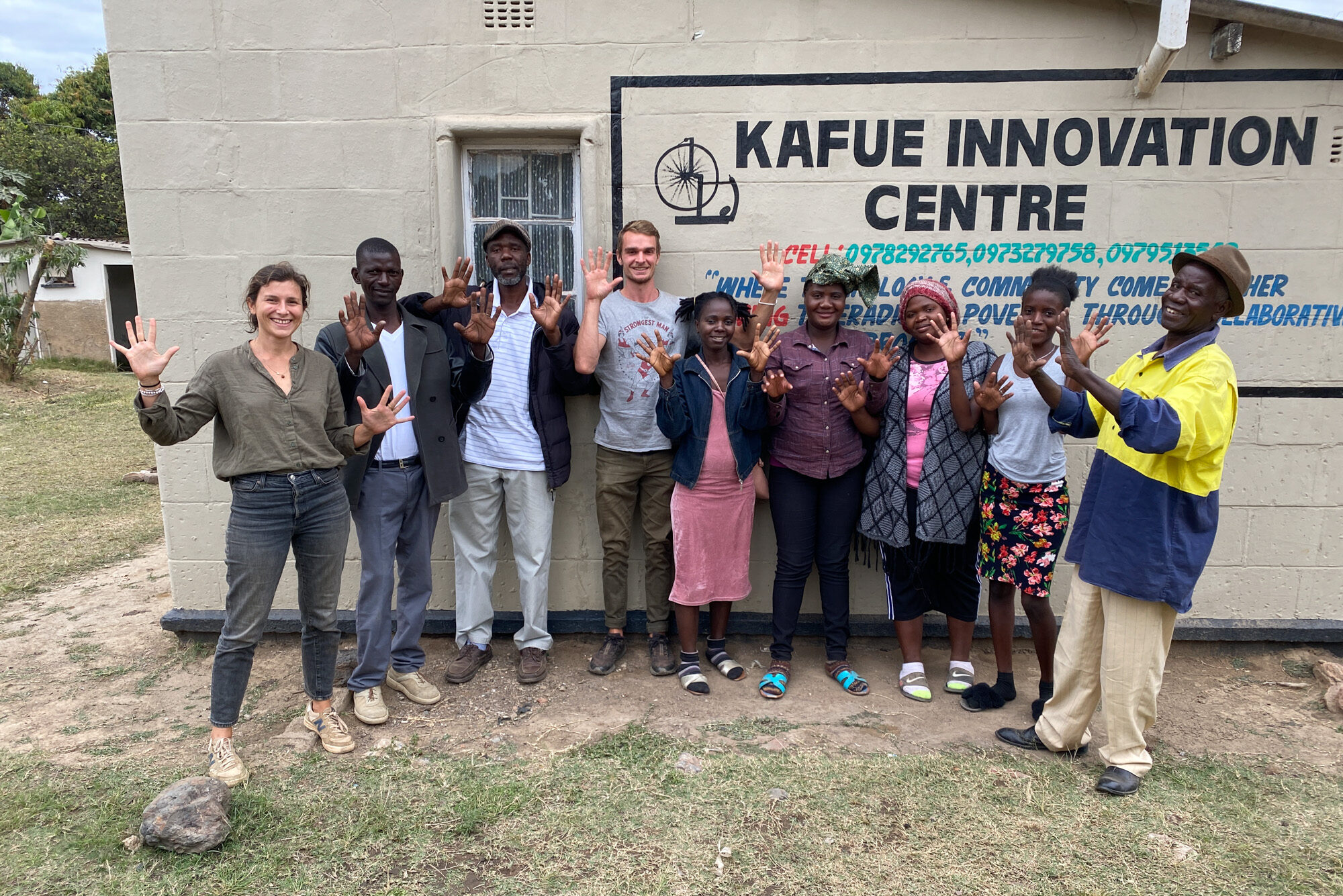 We have just arrived in the town of Kafue. In the last century, the nitrogen mines employed many people. Since the privatisation of the factories and with the decrease of resources to extract, it is now difficult to find a job in the region. Today, it is one of the poorest towns in Zambia.

We have an appointment with John, project manager at the Kafue innovation center.

This center aims to eradicate poverty through innovation. The magic recipe of the center is the “design process”. This circular method allows the development of solutions to the most important problems of the communities. The design process is based on 8 steps:

The process is bound to be repeated to improve the product, the solution after obtaining feedback.

In addition to the design process, the Kafue center works in partnership with foreign organisations. For example, “tools for safe relance” is a British organisation that funds training programs, with equipment to enable apprentices to launch their business. The Kafue center trains apprentices in sewing, welding and metal work with a sewing machine or arc welder. Students are selected primarily from among vulnerable or disadvantaged people who have not had the opportunity to receive a formal or vocational education. Through this learning process, they in turn become inventors.

Today, there are many people at the center. There is a sewing training in progress in the main room. John invites us to sit in the back office to make introductions with the team. Gibson, the dean of the center is an inventor, and he explains that everyone who comes through the center is trained in innovation and design processes. Jones, like John, is a project manager. He has the problem of the plastic waste that is invading the streets in the pipeline. Steven is an inventor. He has developed several solutions to facilitate laborious tasks in agriculture for individuals. Robert is missing. Co-founder of the center and inventor, he is currently on the island of Maamba. Maamba is a small fishing village. Its 300 inhabitants are isolated in the meanders of the Kafue River. To supply the village with electricity, Robert created a turbine without a dam, propelled by the force of the current. A few days ago, a belt in the gearbox broke. He went to repair it. His voice can be heard in the room through John’s phone. He invites us to join him to discover the famous turbine. Tomorrow we will leave for a micro expedition, accompanied by John.

To reach Maamba, after an hour and a half of paved road, you have to take a seasonal track in the nature. Count 1h30 for the 30 kilometers that lead to the last village on the banks of the Kafue River. And to finish, half an hour by motorboat.

The turbine is impressive. Even more so, when Robert tells us that for financial reasons he had to build it with recycled objects. We made a video with english subtitles to present it to you. We hope you will like it as much as we do.

Each inventor presented us with a few of their inventions that we filmed. We made Reels ones available on Instagram and Facebook (see below).

Robert, portrait of an ingenious inventor

Today, when he introduced us to his 19 year old daughter, we realised that Robert is much older than he looks. When we met him the day before, his youthful appearance made an impression on us. We had heard so much about his experience and accomplishments. We expected to see the years on his face.

I (Valentin) went to buy eggs with him. On the way, he showed me his house. The main room reflects the inventor. On the floor aluminum parts serve his ongoing invention : A machine to cook N’shima (corn porridge). He showed me the prototype on his pan. A drill is used as engine. It drives a blender at the bottom and a cup at the top that spreads the corn flour. A sensor detects when the water is boiling and turns on the drill. When the porridge reaches its final texture, it forces on a spring that closes the flour inlet.

The prototype works perfectly. From now on, Robert is focusing on the development of an industrial version.

Every day, we learn a little more about Robert. He is a passionate person! He comes to the workshop every day, including weekends. Since he was 9 years old, he started to invent tools that make everyday life easier.

He did not have the chance to pursue a long education, but he learned by himself. When he lost his parents, he quickly had to take care of himself financially. Full of ingenuity and curiosity, he built a rope weaving machine from recycled objects. Thus, he managed to survive by selling the machines or ropes to fishermen.